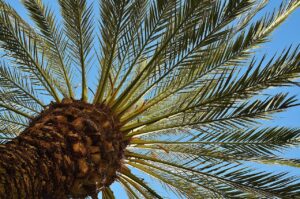 It’s located 12Km southwest of Ur and was considered as a main area of date palm agriculture due to its location surrounded by Ahwar. Date palm trees were sacred by Sumerian, Babylonians and Assyrians due to its living and economical value. It was also proven that date palms were discovered during ancient eras in western Iraq as discovered from cuneiform invented during early dynastic period (2400-300) BC; which marked the writing about date palms that were found in one of the documents written during “Shusan” king era from Ur III dynasty (1970-1978) BC and also showed the location of Mzdahra orchard between Umma and Lagash cities that belong to Umma temple.

The orchard was divided into eight sections depending on the palm age and amount of dates produced, which were estimated at that time by bushels instead of weight. Iraqi dates were known for its unique and savory flavor for a very long time, that emerged from Rafidain waters and fertile soil of Mesopotamia. There are many types of Iraqi dates; one of the best, most luxurious and famous type is called Barhi dates that grow on Berhyah palm trees, which is the main reason behind choosing the name of Berhyah for this product. We chose our staff carefully in the same area that we did our factory, poor families with limited income and limited vision, we trained them, changed their minds, developed their skills and we expanded their capabilities and we opened new opportunities for their future. We believe that helping these people will definitely build new future for Iraqi people and Iraqi families to enter the market and business in different point of view, we believe that helping others will build fruitful future for Berhyah as well.

Add Berhyah Store to your Homescreen!

Add
Enable Notifications    OK No thanks